As I was going through my seminary notes today in preparation for Sunday’s sermon looking for some of my notes on the gift of the Holy Spirit by Rev. Dr. John Kleinig (a retired Lutheran professor from Australia who taught me for a semester in Canada) I found this small nugget of Dr. Kleinig’s on dealing with anger.  I pray it is a blessing for you. -Pastor Korsch

Like guilt the presence or absence of anger is an important index of spiritual health.  While guilt has to do with the evil we do against others, anger is aroused by the evil which is done against us.  While unforgiven guilt undermines our faith in Christ and our assurance of salvation, unforgiving anger destroys love and disrupts the flow of divine life in a Christian community.

Like nuclear radiation, anger can devastate Christian communities and families.  When some Christian brothers or sisters sin against me, I am understandably indignant and hurt.  It’s not right for them to hurt me.  So, unless they readily apologize, I distance myself from them and turn against them.  And they return my frostiness and hostility with interest, which then stokes up my anger still more and turns my resentment into hatred.  They have not just done evil; they are evil.  Since they are my enemies, I avoid them and engage in secret, and sometimes not so secret, warfare against them.  Sadly, I suffer as much, if not more, mentally and spiritually from this cold war as those who have hurt me, for I myself end up controlled and consumed by my own anger.

In Matthew 5:21-26 Jesus says that such anger is murder.  Of course, anger in itself is not evil, for even God is angry at evil and injustice.  What we do with our anger determines whether it is evil or not.  When our anger is fired up, we can use it in one of two ways.  We can either harbour it, so that it breeds bitterness, resentment, malice and hatred, or else we can harness it by seeking reconciliation with those who have hurt us.  Self righteous anger turns us into crusading judges, bitter critics and cynics who can no longer love but are so filled with murderous hatred that we unwittingly commit spiritual suicide (see 1 John 3:14-15).

In Ephesians 4:26-27, 30-32, St Paul gives us some simple, sound advice on how to deal with anger.  First, he warns us of its spiritual cost.  If we go to bed angry, we open the door to the devil and give him a foothold in our lives.  You see, the devil is our adversary (1 Peter 5:8), our accuser (Revelation 12:10).  He not only accuses us of sin to drive us to despair, but he delights even more in rehearsing in great detail all the real and imagined sins which fellow Christians have committed against us.  Thus he disrupts fellowship, unity and love.  He seeks, above all, to isolate us from Christian community, so that as spiritual lone rangers we become easy pickings for him.  Since this is so, Paul urges us never to let the sun set on our anger, but to deal with it day by day.

Secondly, in Ephesians 4:30 Paul says that we are to let anger in all its forms be put away.  The passive form of the verb here is deliberate.  No matter how hard we try, we can’t get rid of anger by ourselves and break the vicious circle triggered in us by it.  Only Christ can do that with his Holy Spirit.  He suffered and died, so that he could take away our hurts as well as our guilt.  He wants to rid us of our anger and all its evil baggage.  We then can admit it to him and surrender it to him in prayer.  We can dump all our hurts on him.  In fact, he wants us to dump on him.  but once we’ve done that, we can’t reclaim it again and use it against those who have hurt us.  So, just as Christ bore our sin bodily for us on the cross, he seeks to rid us of our anger.  But he can only remove it from us if we hand over to him both it and the hurts which feed it.

Lastly, once that has been done, we can forgive those who have hurt us, no matter how grievous the hurt.  We can forgive them in our prayer to God, or, better even, by saying so to another person, or, best of all, by seeking them out and saying so directly to them.  Until we hand on the forgiveness which we have received from Christ, we will be the victims of our own anger and will remain imprisoned in it.

Anger is telling.  It tells us much more about the state of our soul than we realize.  By it the Holy Spirit reveals our hurts, so that Christ may heal them and build up the church through us.  By it Satan seeks to destroy us and the church through us.  The story is told that, when an old Egyptian monk, called Poemen, heard how someone, in his zeal for the Lord, had gone without food for nearly a week and then had lost his temper over some trivial matter, he said: ‘He could do without food for six days, but he could not cast out anger’.  That goes beyond all human power.  Only Christ can do that by the gift of his Holy Spirit.

Talking to Dr. Kleinig back in 2003 about Christianity in Australia he mentioned to me that these days people are not much troubled by guilt (which says a lot about their knowledge of God’s Word and the Law) but for the most part he meets people who are “so hopping mad” with others.  What I took away from this was anger and dealing with anger is a critical issue for us Christians to deal with individually and just as significantly it is something important to be knowledgeable about biblically for the sake of evangelism.

Tags: Anger, Rev. Dr. John Kleinig
← A Pastoral Letter on Marriage for the Young
The Grammar of Holiness: Part 1 → 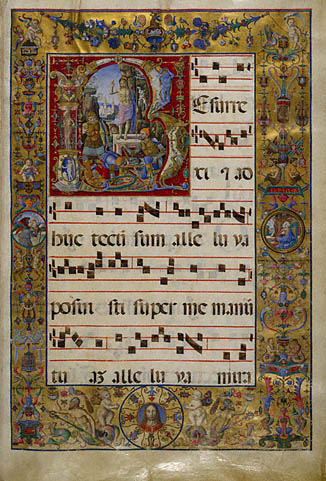 Easter Introit: I have arisen, and I am still with you.