This week I noticed a BBC news article with a video titled: God and Robots: Will AI transform religion?  You can read and watch it here: https://www.bbc.com/news/av/technology-58983047

The article and accompanying video ask if artificial intelligence (AI) and robots could be integrated into religion.  I won’t answer this question for non-Christian religions, but for Christianity the answer is a definite no.  A robot has no place in worship, in leading worship or in being a part of worship because a robot has no soul and so is not that which God in Christ has come to redeem in terms of a worshiper, nor does it have a soul and a Christian faith so it is not qualified to lead worship.

God has made man with a soul and in his image (Genesis 1:26-27).  God did not place his blessing on robots but on people, his creation.

Likewise, the Lord Jesus did not come down to earth in his incarnation to be a robot but to become a man, for that which he did not assume, that he could not redeem.  Christ became like us in every way, with a body and a human mind and a human soul, and human emotions, to die on the cross as the sacrifice for the sins of Adam and Eve and all men.  As redeemed sinners, God accepts our worship as human beings with a soul he gave us who love and worship him.  A programmed robot is not capable of loving God nor will it ever have a soul and so it has no value before God at all, in terms of worship or faith.

The same can be said of an AI robot giving pastoral care or leading worship.  Christ came down to this earth and became man: he continues to speak today through male pastors, not through robots.  As Christ came down to earth and served us in the flesh in his earthly ministry, God chooses Christian men to serve him, ordaining them for his service: they are sanctified and used by him to give pastoral care, to lead worship and to preach.  It is a desecration of the Divine Service, where God serves his church and speaks through the lips of his chosen pastors, to even suggest a robot could lead worship or preach.

While AI and robots may serve humanity in limited roles outside of matters of the Christian faith, and even there we as a society must be careful that people are always in charge and never robots or computer programs: to suggest that AI or robots could have a part in Christian worship or pastoral care is sacrilegious and should be rejected by Christians.

Christmas Day worship at 10AM 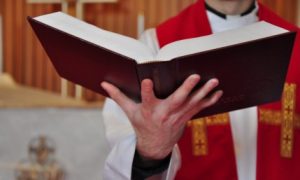